Lipodissolve... Is it Really That Easy?

Okay. You have to admit that dissolving fat away instantaneously sounds wonderful. Imagine  with the least amount of effort you magically loose those stubborn pounds.

But is it really that easy?... Or is there more to it?

This article gets into the nitty-gritty of lipodissolve; what it is, what it isn't... and what to expect. I think we all know instinctively that if it sounds too good to be true... it just might be.

Without further ado... let's talk about it. 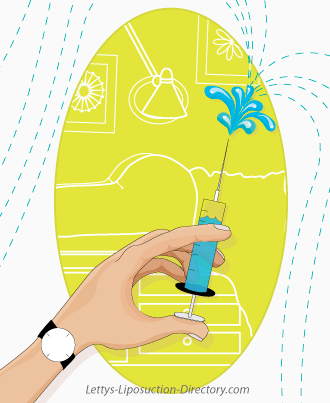 Injection lipolysis (by whatever name it's called)  in theory is a fairly simple concept. Fat dissolving substances are injected into problem areas. The fat is melted, and the body sweeps away the residual.

It sounds so easy.

So for instance, cellulite is a big problem area for many of us ladies in particular. Imagine if you could just have something injected into those thighs and buttocks areas that could completely treat your cottage-cheese fat.

Take it completely away?... It would be remarkable.

That is exactly what lipodissolve promises. So, let's talk more about the pros and cons.

What are the benefits of lipodissolve?

The first and most obvious benefit is the diminishing of fat.

Another benefit that liposculpture provides is convenience. The procedure can be done in minutes, and you return to work  with minimal pain  immediately afterward. Potentially, you could take a lunch break, have the injections, and then return to work without taking any time off.

So time-savings is one of the major benefits.

Also, when you are talking about liposuction  you have to think about major surgery. You will need to take time off work for the procedure and recovery. Liposuction also involves major incisions into the skin which can potentially scar. And again, you will need to recover because you will be having surgery.

Lipodissolve is much less invasive. It isn't surgery at all. It is an in-office, minutes-long procedure.

And finally, another major benefit is having significantly less pain. Liposuction does involve anesthesia, and incisions. Injection lipolysis involves numbing medication at the site of injections. And the resulting pain should not be debilitating or require a lengthy at-home recovery.

What are the risks of lipodissolve?

Although it sounds innocent enough  there are actually some risks involved.

Lipodissolve  as you can see  is a potentially risky procedure. There isn't a great deal of statistics out there on the frequency of side-effects of lipodissolve. But all of these have been reported in the literature.

Letty's Hint: Be sure to have a spot check done before proceeding on a larger scale to make sure that you aren't allergic to the injectable formulation.

The controversy of lipodissolve:

I can't report to you that injection lipolysis is an overwhelmingly safe procedure  because once again  the statistical information just isn't out there (at least not here in the US).

I can say that one of the main reasons why data isn't being carefully collected is that injection therapy in general is not regulated at the federal level. So, there aren't tightly governed standards for who can perform the procedure, and for reporting adverse reactions.

Listen to this.. You can even buy lipodissolve kits online and administer them yourself... YIKES!!!!

In addition to the lack of regulation and oversight, there have been no scientific studies to confirm that lipodissolve actually reduces fat as effectively as it claims to do. AND one very telling endorsement that this procedure doesn't have is one from the American Society of Plastic Surgeons.

Here's is an excerpt taken from the "ASPS Guiding Principles for Mesotherapy/Injection Lipolysis":

"There is very limited evidence available on [lipodissolve] or injection lipolysis for fat reduction. A thorough search of the literature found 14 references.... Based on critical appraisal of the relevant literature, the majority of articles were found to be [of the] lowest levels of validity for scientific studies... Furthermore, these studies do not offer comparable information on formulations and dosages of key ingredients, which are two elements necessary to compare safety and efficacy of treatments."

However, many medical spas, and professionals offer this treatment around the world. So there are those who would attest to its effectiveness and safety.

The cost of lipodissolve:

Prices for lipodissolve aren't cheap. You can spend anywhere from $200 to $800 per treatment, AND if it's going to work - you will likely need more than one treatment to see any kind of result.

Guys, here's the bottom-line. Lipodissolve isn't proven to work. Does that mean that it won't work for some people?... Not necessarily. It may work for some  for others it may not. But in terms of both cost, and the potential risk to your health and beauty (not to mention safety)  it just hasn't risen to a sufficient level to give it a stamp of approval.

I will say this.

Those of you who are absolutely determined to have this procedure  do everything in your power to ascertain the credentials and licensing of the professional who is going to be treating you. And at the very least, make sure they disclose to you what kinds of negative reactions that they have seen. Hopefully that won't be you.

As always  I wish you the very best in your endeavors. And I urge you to be prudent and cautious.

You HAVE to Listen to This:

In Summary:  Whether you're thinking about lipodissolve, mesotherapy, liposculpture, or injection lipolysis - Letty's Liposuction Directory is your up-to-date source for terrific liposuction information... AND above all else - we are completely committed to your health and safety. Please read our complete Medical Disclaimer here.