All about Lipo Seroma

Not quite sure what a seroma is?

Well, you will find out what they are, how you may wind up with one after liposuction surgery.

I will also discuss what sorts of things you can do to promote healing after liposuction surgery.

I've said all along that my entire goal in starting Letty's Liposuction Directory online is to provide excellent information, a little entertainment, and a friendly community for those of you considering liposuction. So, in this article we will continue the tradition of making you a better liposuction patient.

Ready to get started?...

What the heck are seroma?! 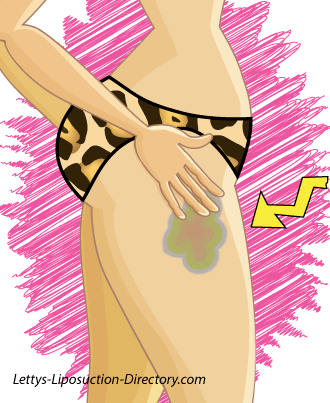 Simply put seroma is a particular kind of "bruising"...

Seroma - are the result of the trauma to the tissue of the skin and underlying layers of fat.

Those structures of the dermis are intact before the surgery begins. After surgery  cells have been disrupted and injured. Small pockets clear fluid often collect when blood vessels are ruptured.

And inflammation caused by dying cells also promotes the collect of fluid.

In fact, the truth is that liposuction is major surgery.

Many folks aren't aware of that fact going into it. They think that they will have quick results and quickly resume their normal activities.

So I really want it to sink in that bruising (seroma, hematoma, etc.  all types of bruises) is very common for any major surgery. Liposuction is no different.

Chances are good that you will be quite sore and tender afterwards, and need some time to recover.

How can I prevent seroma?...

Now that I've told you how common they are  naturally the next question is how to prevent them...

I hope that isn't shocking.

Bruising is a natural process. And some folks bruise less or more than other folks  based on factors not entirely under our personal control. Factors like genetics, and your doctor's surgical skill will play a huge role in how bruised and damaged you are after the fact.

How long does it take seroma to heal?

It can take up to a month or more for the discoloration and bruising to resolve. In some people the process takes longer than in others. No two bruises are exactly alike. Actually what appears to be a surface bruise can be something involving much deeper layers of tissue than appearances indicate.

Bottom-line is that you should plan on having bruising for a significant amount of time after surgery.

How can I promote healing after liposuction?

Okay. This is the real question... As we've discussed prevention is not entirely in your hands, but healing can be. Here are a couple of things you should do after your liposuction surgery:

The advice above may seem pretty obvious. I get that. However, these are things we all sort of know at the "head-level"  but health is a matter of the "heart" as well.

Most importantly though I covered the things that you must do to promote healing after any physical trauma (liposuction surgery included). Even though the advice seems obvious or in some cases cliché is still the absolute best advice for healing quickly and well.

All About Liposuction Seroma References:

In Summary:  Whether you're looking for seroma, liposuction bruises, lipo seromas, surgical bruising, side effects of liposuction, or lipo complications - Letty's Liposuction Directory is your up-to-date source for terrific liposuction information... AND above all else - we are completely committed to your health and safety. Please read our complete Medical Disclaimer here.