Many of us have heard of laser treatments and are curious to see if it is as miraculous in treating wrinkles, lines, and sagging skin as the commercials and news releases suggest that it might be.

After all, who wouldn't want all of their imperfections to magically be "zapped away"!...

However, in doing the research to bring this article to you  I discovered some very interesting information about laser skin therapies that suggests that it may not be for everyone. At the very least, different treatments have to be prescribed for different individuals based on their particular skin attributes.

Find out what those attributes are and other great information about laser skin resurfacing  as we delve more into this very popular cosmetic therapy.

What is laser skin resurfacing?

To begin - laser skin resurfacing is a non-invasive, cosmetic laser treatment used to improve the skin after years of abuse and neglect, or simply due to the effects of aging. 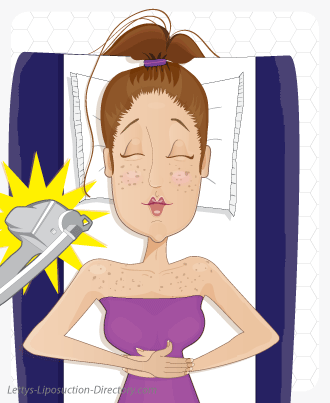 The goal of laser skin resurfacing is to remove imperfections, boost collagen production, and tighten sagging skin with the use of lasers or light-based technologies.

Laser therapies essentially developed in response to the question: "What can be done to encourage aging, photo-damaged skin to rejuvenate?"

In fact - the search for safer, more effective, and less-invasive ways to treat skin is never-ending. As a result laser skin resurfacing technologies are constantly evolving and improving.

So next, let's talk about how laser therapy works.

So exactly how does it work?

Lasers work by emitting a narrowly-focused, high-energy beam of light which produces significant (yet targeted) heat - essentially vaporizing wrinkles, fine lines, and scars. The water contained in the interior of the target skin cells  heats to 2 times the boiling point.

The tissues - in which those super-heated cells reside - vaporize without burning the patient.

But it's the body's response to this "orchestrated damage" that is so remarkable. The microscopically burned tissues slough off over several days. The production of collagen and fibrin kicks into overdrive - rebuilding and replacing tissues as healing takes place.

What conditions does it treat?

Laser resurfacing is a non-invasive, cosmetic treatment used to achieve a number of positive outcomes:

Skin imperfections happen for an unlimited number of reasons. However, laser skin resurfacing is particularly helpful with improving the look of photo-damaged, aging skin. But can also be used to diminish scars from accidents, or acne.

Additionally, lasers have been used to effectively treat underlying laxity (sagging) that occurs over time.

Many different laser treatments have been developed to treat a variety of conditions and patients. The following table lists a few of the more commonly used laser treatments.

What are the side effects?

Since its inception in the late 80's and early 90's  laser skin resurfacing has evolved from high-strength ablative systems to gentler non-ablative systems that help minimize risk and shorten recovery times.

Although not a complete list, these are some of the potential negative consequences of laser skin resurfacing that you must consider before deciding to have the procedure.

Who are the ideal patients for this procedure?

In general healthy individuals are preferred for any elective cosmetic surgery procedure. However, there are certain conditions that are not conducive to laser skin resurfacing. Among those NOT suited for this procedure are:

This isn't an exhaustive or complete list of individuals who are excluded from laser skin resurfacing. The only way to find out for sure whether or not you are an ideal patient is to have a consultation with your physician.

What about dark skin?

In the past, dark-skinned individuals were counseled to avoid laser skin resurfacing and light-based skin therapies because the risk of skin discoloration and scarring was significant.

Nowadays, great strides in understanding the interaction between skin tissue and laser light have resulted in the development of a new and improved generation of treatments that are friendly to Black and ethnic skin.

Many gentler, non-ablative lasers and techniques help to minimize the risks of scarring and discoloration that made the harsh lasers of the past inadvisable for dark skin. Fractional lasers, Light-emitting diode (LED), Radiofrequency (RF) are a few of the gentler innovations that researchers have developed and used successfully to treat photo-aging in dark-skinned individuals.

In addition to this, doctors have developed a set recovery protocols for preventing an overactive immune response in Black skin particularly  that can lead to disfigurement. Among those improved protocols are: skin cooling techniques, and hydrocortisone ointment to prevent inflammatory responses.

Laser treatment for dark-skinned individuals is more difficult than that for light-skinned folks. BUT those treatments are continually improving.

Laser skin resurfacing is an evolving procedure with terrific potential to treat signs of aging, and imprudent sun-worshipping during youth. However, there are some real risks that have to be understood, and considered seriously.

So, before you decide  be sure to consult a qualified doctor. As always your health is more important than your looks. Be sure to keep that in mind when moving forward.

A California woman reverses decades of sun-exposure and abuse in one simple treatment:

In Summary:  Whether you are considering laser skin resurfacing, laser skin treatment, or laser rejuvenation - Letty's Liposuction Directory is your up-to-date source for terrific liposuction information... AND above all else - we are completely committed to your health and safety. Please read our complete Medical Disclaimer here.